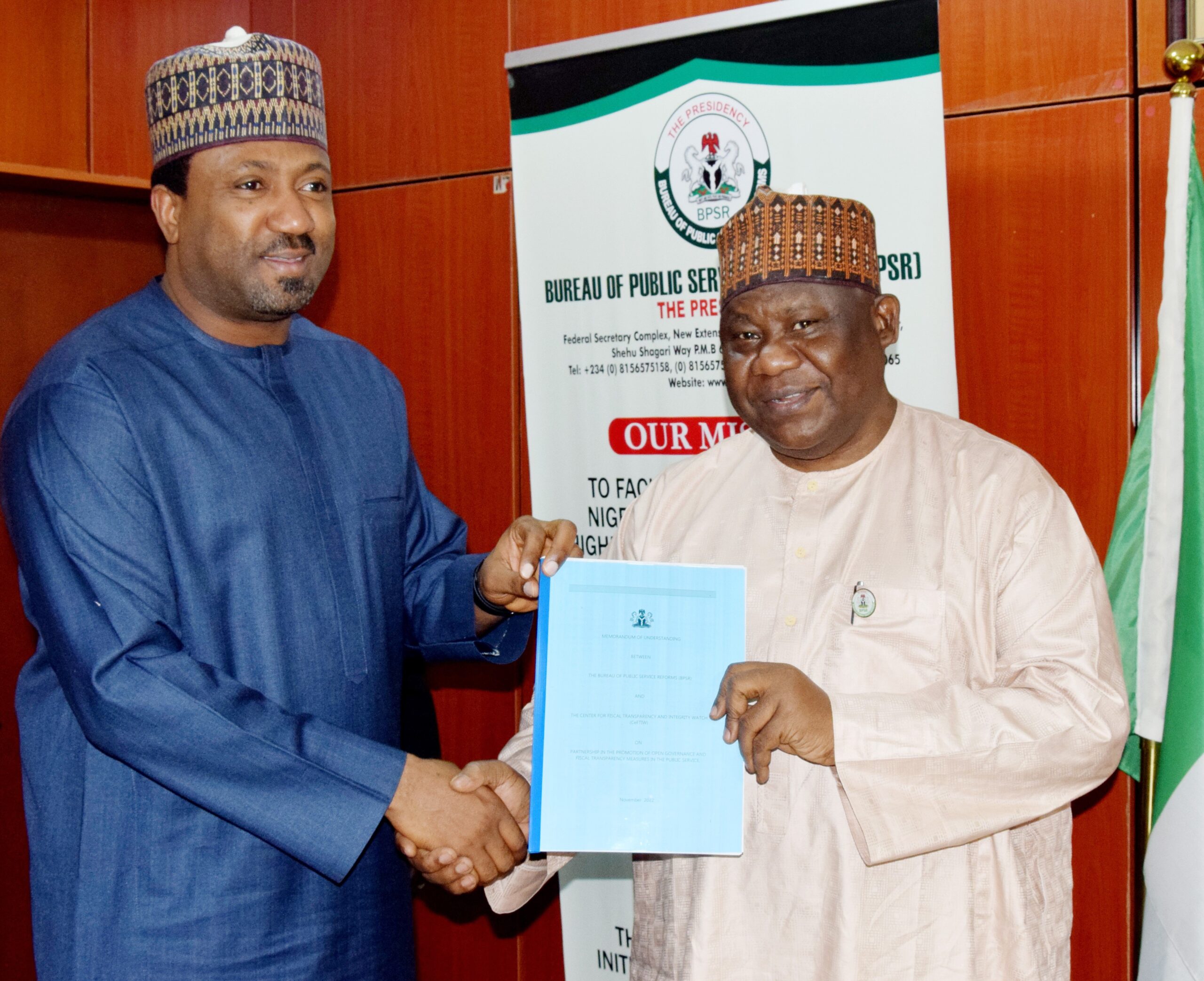 To promote transparency measures and deepen reforms implementation in the nation’s civil service in line with the government’s Open Governance Partnership (OGP) commitments which seek to address fundamental issues of anti-corruption, public service delivery, and civic space, the Center for Fiscal Transparency and Integrity Watch (CeFTIW) has forged a strategic partnership with the Bureau of Public Service Reforms (BPSR).

These commitments were made at the signing of a Memorandum of Understanding (MoU) between the organizations to formalize collaborative efforts in the fight against corruption in the public service through the promotion of accountability and transparency in government businesses.

Speaking at the event, the Executive Director of the Center, Umar Yakubu said that the civil service is the path to economic growth, prosperity and security, and noted that collaborative efforts are required between state and non-state actors to build a transparent and responsive civil service.

While commending the Bureau for being focused on making positive change in the country, he said that the Center, by the signed MoU, would consolidate the Bureau’s efforts through the provision of technological solutions and independent assessment, and continue to advocate for global best practices in the nation’s public service for inclusive growth and development.

The Director General of the Bureau, Mr. Dasuki Arabi in his remarks acknowledged the roles of civil society organizations (CSOs) as necessary checks in the work government does, and noted that the Bureau looks forward to a productive relationship with the Center towards actualizing the government’s OGP commitments for value creation for the citizens.

“Public service reforms globally are supported and pushed by civil society groups through their advocacy programs, calling for good governance and additional allocation of resources in strategic areas to improve the governance process,” the DG said.

Arabi seized the opportunity to call on CSOs to extend their interventions to states and local government areas across the country, where he noted there are gaps that must be addressed for inclusive development.

The occasion also marked the official transfer of the Public Service Diary (PSD) portal developed by the Center to the Bureau. The portal facilitates knowledge exchange between retirees and those in active service.

Arabi said that the portal developed by the Center would galvanize and collate data and information of all persons that have passed through the public service, which would serve as useful resources for the Service, as those in active service can tap from the wealth of knowledge and resources the portal will begin to host.

He said that the PSD portal is novel and an opportunity that will be beneficial to the Service, adding that it will also address the anomaly where the government continues to expend resources in training civil servants who exit from the Service without a platform that facilitates information sharing with those in active service.