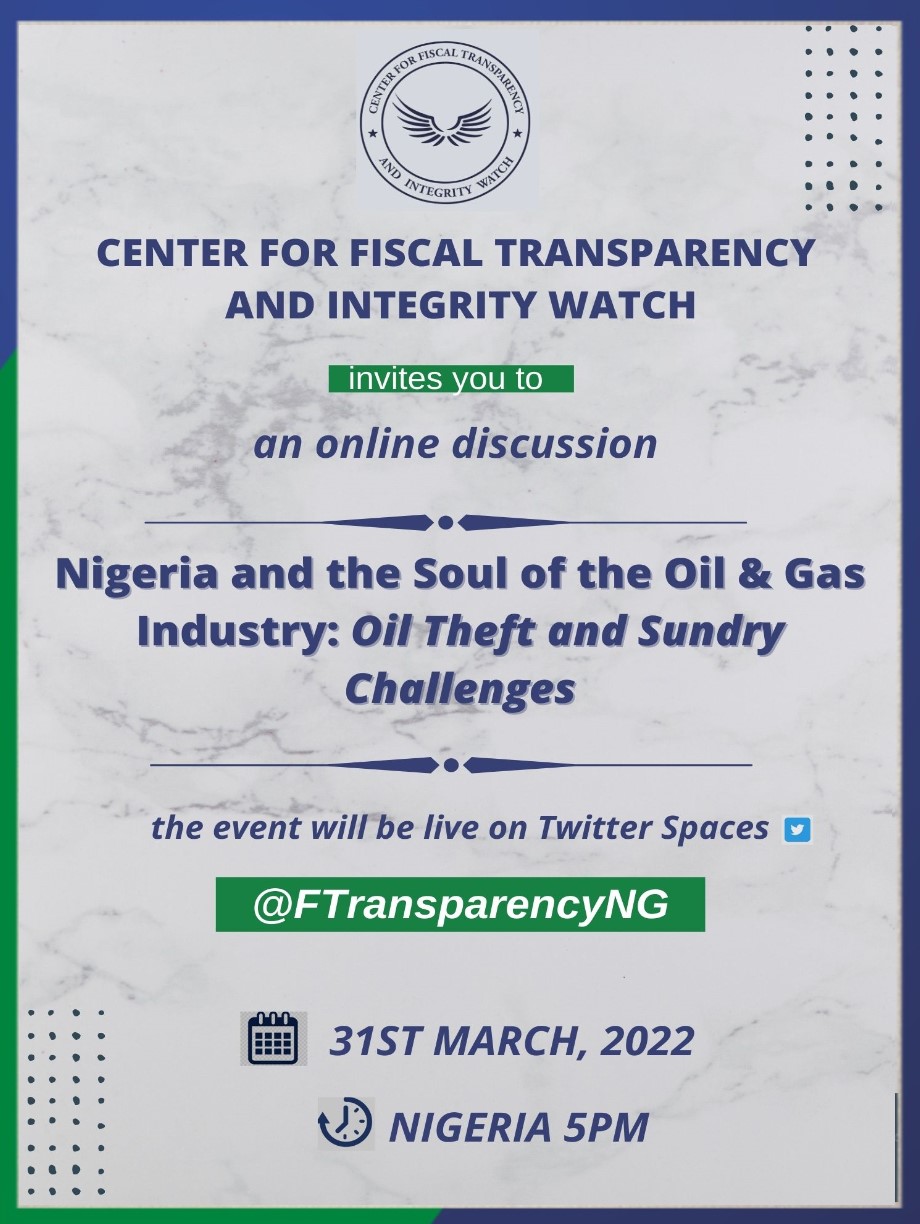 Responding to recent report by the Nigerian Upstream Petroleum Regulatory Commission (NUPRC) which disclosed that the nation has lost $3.27 billion (about N1.36 trillion at official rate of N416.25) worth of oil to vandalism and oil theft in the past 14 months, Olabode Sowunmi has called for the need for reorientation of the people at the bottom of the pyramid to understand the economic and intergenerational implications of oil theft activities; saying that “culture will always defeat strategy.”

Sowunmi, an industry expert was speaking to the topic of the follow-up conversation of the Center for Fiscal Transparency and Integrity Watch’s (CeFTIW) weekly engagement which sought to interrogate oil theft and sundry challenges in the nation’s oil and gas sector.

He said that the nation oil sector is in a transitory stage which requires the cooperation of all stakeholders to maximize the industry’s value chain.

“The industry belongs to all of us as Nigerians, and it is important we contribute to ensure that the economy stays alive and that the nation can compete economically among comity of nations”, he said, adding that the subject of oil theft touches not just the soul of the economy, but the life of everyone.

Sowunmi who noted that oil and gas accounts for close to 90 percent of the nation’s forex earnings described oil theft as economic sabotage and a treasonable offence giving its long term implication.

He said that oil theft, like illegal drugs and diamonds are global issues, but called on authorities to expedite remedial actions so it does not get to a stage where the soul of the nation’s economy is deeply affected.

The consultant to the Senate Committee on Oil and Gas identified economic, political and host community struggles as factors responsible for oil theft, and enjoined the government to explore technology options so as to safeguard the nation’s oil infrastructures. He added that the option of marking the nation’s crude oil to the extent that illegal crude sales can be identified and culprit apprehended is one of the options that have been discussed in the past.

“The recipients and buyers of such illegal crude should be engaged and punished, especially in line with the basic principles of criminal laws which prohibits buying of stolen products,” Sowunmi added.

Reiterating his call to mobilize and engage host communities at an intellectual level, the energy analyst also called on the good people of the region to support law enforcement efforts towards ridding the sector of criminal elements who are known community members, failure of which he said: “we will all be playing a cat and mouse game.”

Speaking further, he said: “the Amnesty programme was a strategic attempt to give people who were militants skills that would make them economically productive; however, no matter the skill a man has, if he does not have a mindset of work, he may not use that skill for work.

“What has happened is that, the theft and other sundry challenges are rooted as cultural problems, in other words, there are people who see sabotaging the system as normal and the right thing to do; it is that culture that needs to be engaged and discussed, and until that changes, the system would remain as it is.

“There is also the need to crush the entitlement mentality of the people who believe that they can just have everything at a platter of gold because they are hosting IOCs”, he submitted.

At the engagement series, the Center called for immediate strengthening of security around oil infrastructures to deter vandals, while those paraded to have been responsible for oil theft and vandalism by the Navy should be prosecuted to serve as deterrent.

The Center also advised that the government should deploy technology to monitor oil infrastructures as long term measure to save the soul of the nation’s oil and gas industry.