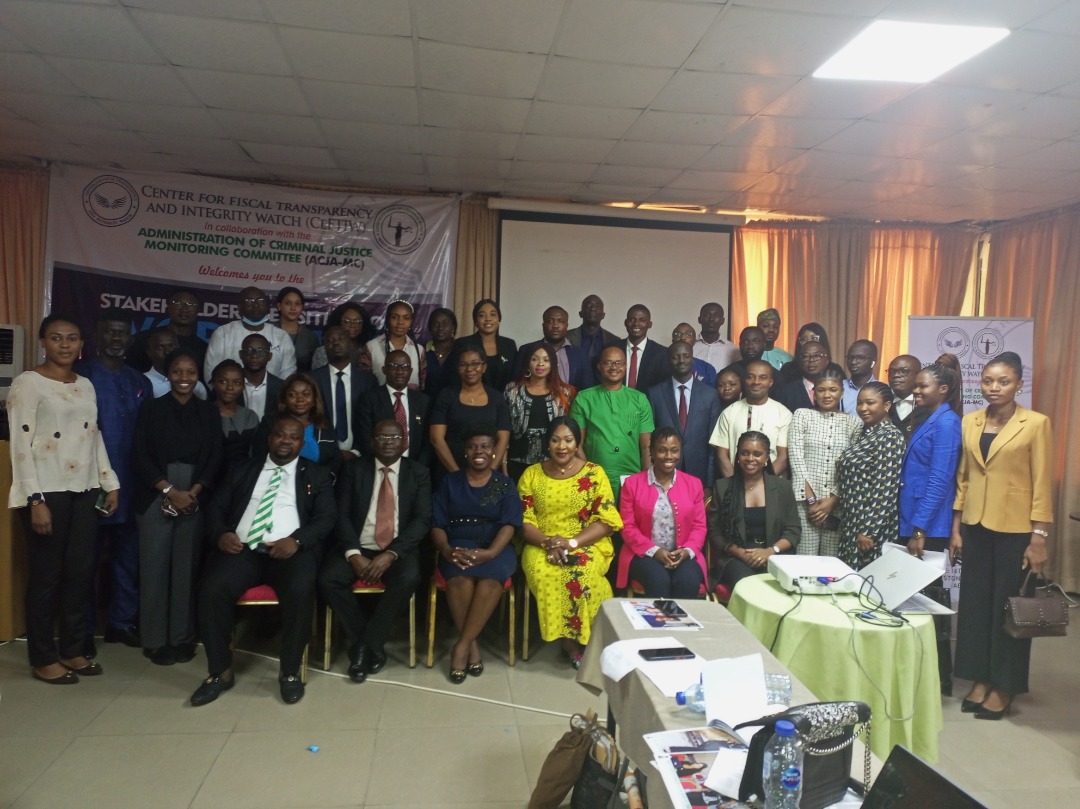 In furtherance of its resolve to support stakeholders in the anti-corruption environment with knowledge and competencies, the Center for Fiscal Transparency and Integrity Watch (CeFTIW) has organized a stakeholders’ workshop on the New / Amended anti-corruption laws.

In his opening remarks, the Executive Director of the Center, Yakubu Umar said that the workshop is specially packaged to enhance the understanding of the different roles and obligations that each stakeholder ought to play in advancing the fight against corruption in our society.

He called on stakeholders to support well-meaning government’s effort to rid the nation of endemic corruption which continues to undermine development efforts.

In his presentation of the Money Laundering (Prevention and Prohibition) Act, 2022, Godwin Iheabunike said that the amended Act expanded the scope of money laundering offences and provides for enhanced customer due diligence measures.

Iheabunike disclosed that the Act brought the country’s anti-money laundering regime in conformity with international best practices as exemplified by the Financial Action Task Force (FATF) recommendations, and outrightly criminalized money laundering and terrorist financing, as well as the overall supervisory framework for AML and Combating the Financing of Terrorism in Nigeria.

He called for further strengthening of human capacity to understand the current phase of AML/CFT in the world to enable proper interface with the Inter-Governmental Action Group against Money Laundering in West Africa (GIABA) and FATF in order to ensure the efforts put into enacting the law are not in vain.

AIG Muazu Zubairu, mni (rtd) while building capacities of participants on the Terrorism (Prevention and Prohibition) Act 2022 said that the new Act provides for effective unified and comprehensive legal, regulatory and institutional framework for the detection, prevention, prohibition, prosecution and punishment of acts of terrorism, terrorism financing, proliferation and financing 0f the proliferation of weapons of mass destruction in Nigeria.

Zubairu added that the new legislation meets international standards, and enjoined stakeholders to take advantage of its provision to consolidate the global fight against terrorism.

On his part, Sulayman Dawodu, the Secretary of the ACJMC in his exposition of the Proceeds of Crime Act (POCA) revealed that the new law harmonizes and consolidates existing legislative provisions on the recovery of proceeds of crimes in Nigeria; and importantly, empowers the Law Enforcement Agencies to administer the provisions of the Act.

Describing the Act as “the most important legislation amongst the laws proposed to combat corruption and foster good governance in Nigeria,” Dawodu said that the Act establishes a robust legal regime of civil forfeiture and a framework by which proceeds of crimes would be warehoused and managed; and comply with various international obligations from FATF, GIABA, UNCAC etc.

In his closing remarks, the program manager of the Center, Jonah Uket called for more sensitization and stakeholders actions to publicize the new laws for better understanding and application.

He enjoined other Civil Society Organizations (CSOs) in the anti-corruption environment to support efforts in building relevant stakeholders’ capacity in the knowledge and implementation of the new laws.