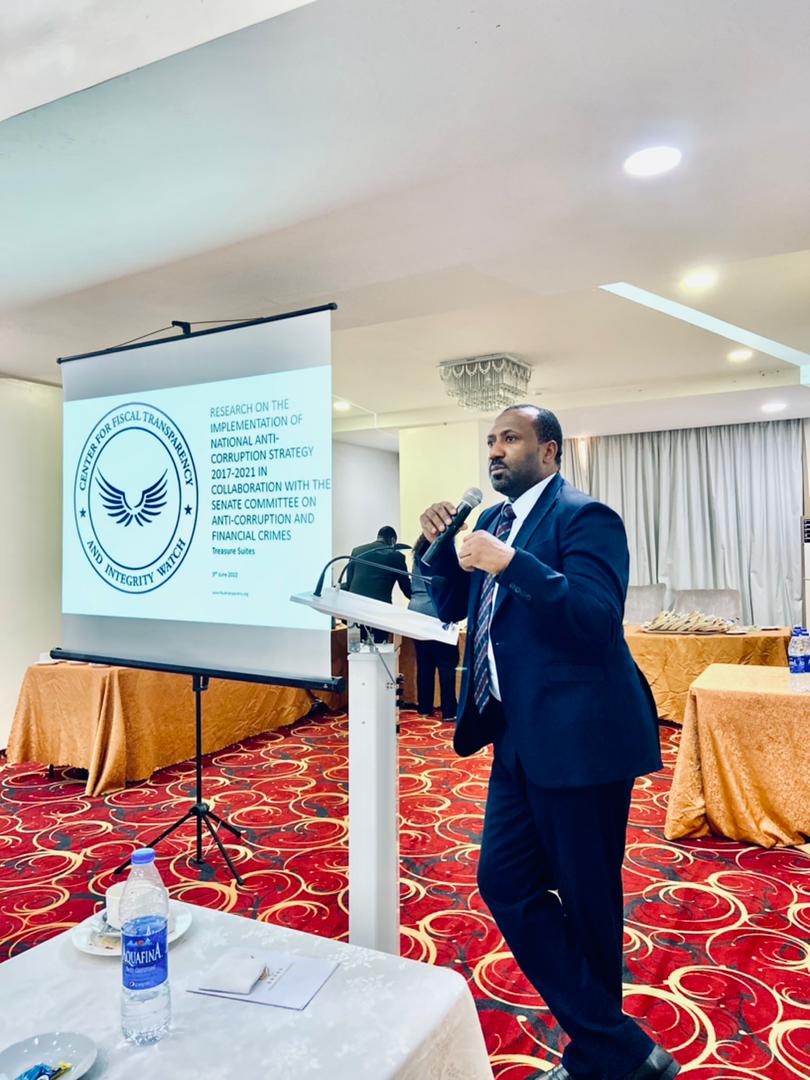 To strengthen mechanism against corruption and abuses, the Center for Fiscal Transparency and Integrity Watch (CeFTIW) has called for more stakeholders’ actions towards the implementation of National Anti-Corruption Strategy (NACS) framework.

The Executive Director of the Center, Yakubu Umar made this call while presenting the report of research on the implementation of National Anti-corruption Strategy 2017-2021 in collaboration with the Senate Committee on Anti-Corruption and Financial Crimes at a one-day roundtable of the Monitoring and Evaluation Committee to review and track progress by Anti-Corruption and Transparency Units (ACTUs) in Ministries, Departments and Agencies (MDAs).

Umar said that the NACS, which is founded on five pillars of prevention, public engagement, ethical re-orientation, law enforcement and sanctions, and recovery of proceeds of crimes, has witnessed a major setback due to the non-formation and inauguration of the Inter-Ministerial Committee (IMC) as provided for in the NACS document.

“Inter-Agency rivalry and supremacy battles also undermined effective implementation, working against cooperation, information and intelligence sharing, effectiveness of operational platforms and coordination of the anti-graft war,” the Executive Director said, adding that the lack of adequate “knowledge and misinformation on the part of most agencies as to their expectations in the implementation of the NACS policy,” is a drawback.

In his remarks, the Anti Corruption Manager of the Rule of Law and Anti-corruption (RoLAC), Emmanuel Uche also stressed on the need for the fight against corruption to go beyond just the president’s body language into a collective fight of all stakeholders and citizens.

Uche called for an harmonized approach to the fight against corruption, especially the need for NACS to cascade down to more states of the federation; pointing out that NACS implementation at the federal level is only a fraction of the deep-rooted problem of corruption nationwide.

The Director, Asset Recovery, Ministry of Justice, Hajiya Ladidi Mohammed while acknowledging the contributions of stakeholders towards the production of the NACS document said that a lot more needs to be done by ACTUs across MDAs in driving the implementation of the strategy.

She said that creative ways of pushing the campaigns should be evolved by ACTUs so that the entire public service can be carried along in the fight against corruption.

In their assessment of NACS implementation by ACTUs in MDAs, the Monitoring and Evaluation (M & E) committee reported that awareness and knowledge of the NACS in MDAs is low. While it attributed the lack of awareness to poor funding, the roundtable was urged to take ownership of the campaign as a service to nation.

The Committee called for partnership and better coordination, as well as specialized training for ACTUs, noting that support is also required from the Ministry of Finance, Budget and National Planning and the Office of the Accountant General of the Federation (OAGF) “to ensure budget lines are created for Anti-Corruption activities.”

Stakeholders were enjoined to do more on publicity and enlightenment by organizing workshops and campaigns to intimate workforce in their respective organization on the NACS, noting that awareness is starting point to mindset change.

Also, MDAs whose website are not functional were urged to approach the Ministry of Communication and Digital Economy for IT support in order to widely publicize the NACS document and its implementation.